Looney Bird's was an American chain of restaurants and family entertainment centers founded by then-Johnson Industries CEO Phil Stacker and Creative Engineering in July 1990. The brand emerged in the chaos that ensued between Creative Engineering CEO Aaron Fechter and ShowBiz Pizza Time, Inc. (owners of the Chuck E. Cheese's and ShowBiz Pizza Place franchises) when the latter tried to force Fechter to hand the rights to his animatronic band, The Rock-afire Explosion, for little-to-no monetary compensation.

Once Stacker resigned from Johnson on October 22, 1991, his replacement, Sheldon Johnson, Jr., resolved those disputes. Between 1992 and 1996, 25 new locations opened in the United States and Mexico, some of which having been ShowBiz locations previously. In 1992, Fechter began working on an update on the Rock-afire Explosion, dubbed The New Rock-afire Explosion, which used more articulated animatronics dubbed "miijins". The new band was completed in 1994, and was installed in 20 locations. At Johnson's request, some changes were made such as having the characters play their respective instruments, as well as replacing the servos powering their eyes with pneumatics. 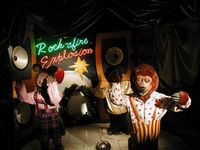 Retrieved from "https://differenthistory.miraheze.org/w/index.php?title=Looney_Bird%27s_(Johnsonverse)&oldid=36507"
Category:
Cookies help us deliver our services. By using our services, you agree to our use of cookies.