The NASCAR Street Cup Series had its roots in the testing of the "L-R" cars of 1986, 1987 and 1988; the series itself ran from 1989 to 1996 when it was shuttered due to the decline of street circuits across the USA and the closure of one of the series' signature circuits, Dallas Street Circuit in 1996. 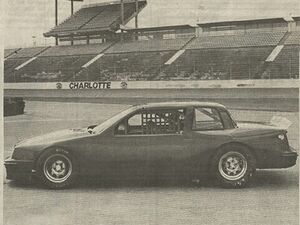 Road course racing has always been an interesting part of the NASCAR schedule. Stretching back to the 1950s, these heavy, bulky cars have lumbered through left and right turns with the grace of a hippopotamus. But there was a time when NASCAR looked to create a special race car that could navigate road courses like a sports car and greatly expand the number of road races in the Cup schedule. For a brief period in the 1980s, street courses were seen as the future for NASCAR, and the "L-R car" was planned.

By the mid-1980s, NASCAR only raced on one road course: Riverside International Raceway. But the writing was on the wall that Riverside would not live to see the nineties. After Riverside got swallowed by land developers, where would NASCAR race? Adding to that, at the time, Riverside was the only track the series raced on west of the Mississippi River; without it, the Cup Series had no West Coast presence. With that in mind, there were very few ovals in the area and a handful of road courses. NASCAR executives wanted to keep their options open but knew that Winston Cup cars could not compete on most of the tight road courses in the country. If they wanted road racing, a new car was needed.

In early July 1985, the Charlotte Observer reported that NASCAR was exploring the possibility of developing a new car that could race more competitively on road courses. The new racer became known as the L-R car, short for Left-Right. This would increase the options of tracks they could race on, and perhaps most importantly, it created the possibility of racing on the streets of heavily populated metropolitan cities.

"Looking into the future, we want to go into a number of major market areas," NASCAR Vice President Jim Hunter said. "The problem was that our big cars weigh 3,700 pounds and really aren't built for road courses. They can't put on a race on tight street courses. That's when Bill (France Jr.) said 'Why not take the V8 and put it in a smaller, lighter car, and run 'em in the streets of Detroit or the Meadowlands, for example?'" NASCAR teams and drivers fully supported the idea.

"They're talking about Ford Mustangs and Tempos, Pontiac Sunbirds, the Chevy Cavalier, cars like these," Junior Johnson said. "I think it's a heck of a good idea 'cause we need to have the races in the major areas, markets, that NASCAR's talking about."

Ideally the L-R car would weigh between 2,500-2,600 pounds, about 1,000 pounds less than a Cup car while using the same engines. It appeared NASCAR indicated their intention was not to create a new series, but to run L-R cars in about six new races on an expanded Cup Series schedule. Executives set a goal that these new cars would be ready for the 1987 Cup season.

A prototype Pontiac Sunbird race car was ordered by NASCAR to be built by Banjo Matthews. After Matthews completed his work on the chassis, Richard Childress Racing was tasked with the final assembly to make it a race car. The Charlotte Motor Speedway "roval" has gotten attention for its addition to the Cup schedule in 2018, 30 years ago it was used as a testing venue for the L-R prototypes.

January 28, 1986 is known in US history for the Challenger Space Shuttle disaster. 560 miles away from the accident in Cape Canaveral, Bobby Allison and Dale Earnhardt spent that morning doing the first test of the L-R car. The Pontiac weighed 3000 lbs and had a 101 inch wheelbase. However, as 56% of the weight was distributed in the front, the car handled quite poorly on the road course.

"Boy that thing went left and right and right and left - on the straightaways," Allison said. "The car is neat and the idea is great, but they need to work on it a little."

"It's a little front heavy," Dale Earnhardt said. "The weight's not quite as good as it needs to be on the car. There's a lot of improvement to be made and I think once they get the car on the rule book, so to speak, we'll have a good racecar."

Overall, it can be said that the test was a complete failure and only served to expose the great difficulty in creating a brand new race car. As NASCAR struggled to engineer a new racer, it sought help from teams and drivers like Bobby Allison.

"What happened was one day France said, 'I wish some of you people would support this and build a car,'" Allison recalled. Bobby then commissioned his chassis builder Mike Laughlin to build a Buick Somerset that would handle better than the Pontiac. But with no clear set of rules, Allison was the only one to invest nearly $60,000 in building a prototype race car.

At the same time, the L-R cars became more of a focus for NASCAR as scheduling options increased. Upon the series' return visit to Watkins Glen in August 1986, NASCAR executive Les Richter spoke of how the L-R series had become more of a priority.

"The 'L-R' concept was explored because last year we were afraid that Riverside in California would only be available to us this one last year," Richter said in 1986. "Now it appears it won't be available next year, and therefore we are pleased with the progress we're making to replace it."

Meanwhile, Allison's Buick Somerset was ready by the fall. A second L-R test was held at the Charlotte road course on September 10, 1986. Compared to the first car, Allison's Buick was 400 pounds lighter with a 102 inch wheelbase. The weight was better balanced as well, only 49.5% of the weight was in the front.

Clifford Allison driving the L-R Buick in the 1987 IMSA race at Daytona.

But as Les Richter said at Watkins Glen, the L-R cars were, at the moment, just a way to increase scheduling options, particularly on the west coast after losing Riverside. After the track left the schedule in 1987, NASCAR replaced it with races at Longbeach and the Meadowlands for 88, maintaining the western presence they had. The new tracks and the overall difficulty of driving them with the old stock cars made it a necessity to make the L-R car a viable replacement to the traditional stock cars.

In 1987, Allison tested the L-R Buick one last time to prepare it for the 1988 season, having it go around the Daytona Roadcourse in the IMSA series, with his son Clifford piloting it, to test it's abilities. The car proved incredibly fast, and finished 5th.

Technically, in 1988, a L-R car did race in competition, NASCAR's first race at Long Beach and their first race at the Meadowlands. In early 1988, Allison pulled the Somerset out of his race shop, dusted it off, and devised a plan to race it in the Longbeach 500k race. For the Alabama driver, he planned to share the Buick with his sons Clifford and Davey. Unfortunately, those plans were stifled by Ford Racing executives who did not want Davey Allison to race a Buick in anything. Instead, veteran road-racer Dick Danielson completed the trio with Bobby and Clifford. Competing in the race, the car qualified 13th and charged to the front, easily winning the event and solidifying the L-R car, and laying the foundation for the NASCAR Street Cup Series.