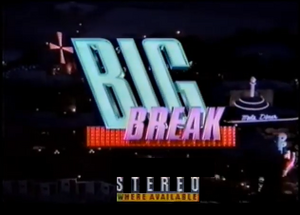 The show was a talent contest where singers and musicians competed for a $100,000 prize at the end of the season with a studio audience deciding the winner.

In Season 1, The Pied Piper of R&B R.Kelly along with his former all-black male singing group called MGM (Musically Gifted Men) competed on an episode of this show along with winning $100,000.

In Season 2, Greg Rowles was a contestant in the Male Vocalist category ended up winning the Big Break Artist of the Week and won $5,000 but failed to win the Semi-Finals, Although he won The Male Vocalist Title on the 11th and Final Season of Star Search hosted by John Schneider airing on UBC in 1994.

Retrieved from "https://differenthistory.miraheze.org/w/index.php?title=Big_Break_(Jayverse)&oldid=31411"
Cookies help us deliver our services. By using our services, you agree to our use of cookies.