The following are promises that were made by Sheldon Johnson, Jr. for his successful 2020 United States presidential election campaign. Johnson has stated that he plans on making many changes to the United States of America. Some of them are plans that he has sworn not to announce until he is inaugurated.

Johnson seeks massive reforms to the politics of the United States, including how elections are carried out, corporate influence in politics, etc. Among these reforms include:

Johnson also seeks major reform to the military, including:

Johnson is the most-vocal opponent of the Trump administration's environmental policies, going as far as to call Trump a "Captain Planet villain" whose "greedy, destructive policies could one day result in biosphere collapse and human extinction before we can create interstellar spacecraft to colonize other systems and/or terraform Mars". He not only plans to completely reform the EPA, he also plans to: 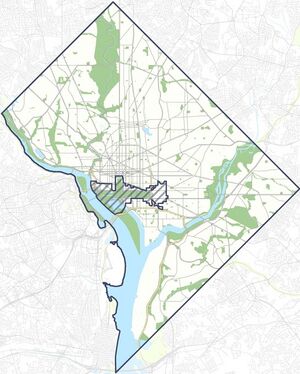 An idea of Johnson's plan for Douglass's state map. (The striped area represents what the planned federal district will look like.)

Retrieved from "https://differenthistory.miraheze.org/w/index.php?title=Campaign_Promises_of_Sheldon_Johnson,_Jr._(Johnsonverse)&oldid=35136"
Category:
Cookies help us deliver our services. By using our services, you agree to our use of cookies.