Chocodile is a funny animal cartoon character. He was created by Johnson Industries employee Randy Perkins at Johnson Studios in 1936 for the Ludicrous Limericks series of theatrical shorts, and quickly became the mascot for not only the series, but the entire Johnson company in general. In the first Chocodile comic strip story, "Chocolate and Cherries" (1939), his full name is given as Chockel Orson Dile, although this is rarely used.

An anthropomorphic brown crocodile, Chocodile, despite his love of chocolate, is thin and surprisingly athletic, able to quickly beat up anyone who wrongs him or his friends. Having starred in over 500 short cartoons since his introduction, Chocodile is one of the world's most recognizable characters, receiving a newspaper comic strip that has run since 1940, a star on the Hollywood Walk of Fame in 1998, and other forms of merchandising. He has starred in twelve movies, beginning with The Chocodile Movie in 1942, and eight television series, starting with the long-running anthology series Chocodile and Friends in 1955.

According to creator Randy Perkins in a 1943 Johnson Radio interview, the character came to him in a dream he described as "bizarre", in which a cartoon crocodile on all fours was rocking back and forth singing, "Chocodile", and that when he woke up the next day, Perkins started drawing several designs for the character, before getting the famous "brown crocodile" look. When creating the cartoons, Perkins gave a series of simple but strict rules for the writers and animators:

In addition, radio voice actor Mel Blanc was cast to voice Chocodile, his voice being a Jimmy Stewart-like drawl (Blanc would use this voice for Bugs Bunny in the 1941 Merrie Melodies short "Elmer's Pet Rabbit"). He went on to voice the character until his 1989 death, though his cartoons continued to release into October 1990. His son Noel became Chocodile's official voice actor from 1989 to 1995, when then-21-year-old Dana Snyder was cast as his replacement, though Blanc continued voicing Chocodile occasionally (mainly whenever Snyder was unavailable) until retiring from voice acting in 2005. In 2006, unused voice clips of Mel as Chocodile from his long tenure were used in the 70th anniversary short "Chocodile's Birthday", which is patterned after his 1940s outings. 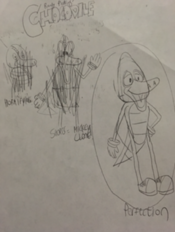 The original concept sheet for Chocodile from 1936.

The first cartoon to star Chocodile, Perkins' "The Brown Crocodile", was released on December 4, 1936. The cartoon followed Chocodile evading capture from the Australian hunter Solomon and his shotgun, using a combination of his wits and the ideas of his love interest, Cherridile. In this cartoon, Chocodile had a slightly different design, which had him being thinner with a more sausage-like head and light yellow gloves. His look was finalized in 1939's "Crocodiles, Crocodiles Everywhere".

"You all come back now, you hear?"

This line, said by Chocodile (who comes out of a curtain and bows while saying the line) at the end of every Ludicrous Limericks short since 1939, has become iconic, alongside the line "That's all folks" from the Looney Tunes series, and has become a part of the public lexicon.

In Chocodile and Friends, Chocodile usually says the line before a cartoon. He has also said this in the logo for Johnson Cartoon Studios since 1968.

Chocodile's iconic theme song was composed by Mayhew Lester Lake, and is used in the title cards of almost all of his shorts; the rights for the theme are also held by Associated Production Music for use as stock music.

Retrieved from "https://differenthistory.miraheze.org/w/index.php?title=Chocodile_(Johnsonverse)&oldid=31957"
Category:
Cookies help us deliver our services. By using our services, you agree to our use of cookies.