Continental Shipping Lines (often shortened to CSL) is an American ocean and cruise line based at San Jose, California. It was founded in 1875, and is one of the largest lines in the world.

The line has over 500 ships, including cruise liners, ocean liners, and tenders. It is owned and operated by Johnson Industries as one of its largest subsidiaries. 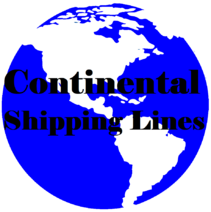 The Continental Shipping Lines logo from 1981 to 1992.
Retrieved from "https://differenthistory.miraheze.org/w/index.php?title=Continental_Shipping_Lines_(Johnsonverse)&oldid=35829"
Category:
Cookies help us deliver our services. By using our services, you agree to our use of cookies.