On the last lap of the 43rd Annual Daytona 500 on February 18, 2001, Michael Waltrip was in the lead with Dale Earnhardt, Jr. in second. In third was Dale Jr.'s father, Dale Earnhardt. On the fourth turn, Earnhardt and Ken Schrader crashed, though, as if fate came in just in time, Earnhardt miraculously survived. This is the POD for this timeline.

Before the beginning of the season, a new points format dubbed "The Chase" was to take effect. However, Earnhardt was able to dissuade Brian France from actually going through with this idea. Earnhardt surpassed Harry Gant as the oldest driver to win a NASCAR race when he won the Subway 400 at Rockingham Speedway at the age of 52 years, 10 months, and 13 days. This was his only win that year. 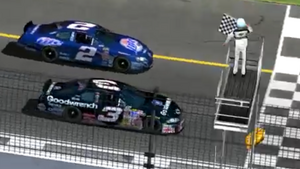 2005 was Earnhardt's final season before his retirement, in a joint retirement tour with Rusty Wallace and Ricky Rudd.

With Earnhardt’s retirement, Jeff Burton, who had driven the #99 Ford for Roush Racing since 1996, was selected to replace him in the #3 for 2006, as Carl Edwards ran for Rookie of the Year.

When the debut of the Car of Tomorrow was set to debut, Earnhardt was livid. He was quoted as saying, "I don't know how or why anyone at NASCAR would approve this abomination". He dissuaded NASCAR from going through with the idea, and so the Gen-4 car was retained until the introduction of the Generation-5 car in 2013.

2008 saw Dale Earnhardt, Jr. inherit a 25% stake in the team. That same year, Dale Earnhardt made the decision to divorce his wife Teresa Earnhardt after 26 years. In an interview, Earnhardt said about her, "Teresa has no consideration about me or my legacy", while Teresa countered with, "I've always cared about him. If anything, he was the one who used me". This war of words continued to 2010, and Teresa was forced to resign from DEI after the scandal.

2013 started out with Earnhardt making his opinion known about newcomer Danica Patrick, saying, "She has no business behind the wheel of a race car. I got nothing against women in the sport. Well, ones who earn their seat, that is".

Retrieved from "https://differenthistory.miraheze.org/w/index.php?title=Dale_Earnhardt_Survives&oldid=35174"
Categories:
Cookies help us deliver our services. By using our services, you agree to our use of cookies.