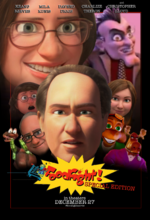 The poster for the Special Edition.

On August 6, 2018, Tim Johnson announced he and Chloe had found the location of the stolen hard drives for the original version of Foodfight! and physically fought the thieves (who were ex-Pixar animators trying to snuff out competition) for them the day before. The thieves were taken into custody, and Johnson announced it would use the files with more relevant celebrities in an all-star cast, with foreign dubs all having their local mascots and celebrities from their countries, to create a special edition of Foodfight!, this time as an R-rated film, that was touted as the "Anti-Star Wars," a reference to the Special Editions of the Original Trilogy. The film was re-released on December 24, 2019, sixteen years to the day when the film was originally going to be released, at the TCL Chinese Theater, and December 27 of that year worldwide. Director Larry Kasanoff had no involvement in this edition, but still had an "Originally Directed by" credit.

Sunshine Goodness is now the antagonist instead of Lady X. Sunshine's product is failing, turning her bitter and evil and leading to her abandoning Dex to join Brand X; Lady X goes with Dex instead. According to Tim Johnson, this would make it clearer why she was so infatuated with Dex and wanted him to support both her and Brand X, as they would have been in a relationship beforehand.

The new version of Foodfight! was universally acclaimed. On Rotten Tomatoes, it has a score of 100%, with its critic consensus reading, "Massively redeemed from the half-baked disaster of the original, Foodfight! has been revitalized with amazing storytelling and animation". Critics Gene Siskel and Roger Ebert both gave the film "Two Thumbs Up" on Siskel & Ebert, with Siskel calling it "the biggest 180 I've seen in film alterations". Journalists

Retrieved from "https://differenthistory.miraheze.org/w/index.php?title=Foodfight!_Special_Edition_(Johnsonverse)&oldid=35547"
Category:
Cookies help us deliver our services. By using our services, you agree to our use of cookies.