Garrett Jordan "Gary" Nelson (b. May 11, 1983) is an American actor, producer, director, and game show host. He is best known for playing Ness in the movie and series adaptations of the SNES video game EarthBound from 1997 to 2001, and hosting The Casino of Luck since 2009.

The son of actor Eli Nelson, Gary is also known for his

Nelson married his former EarthBound co-star Kate Locklain on September 30, 2007 at the 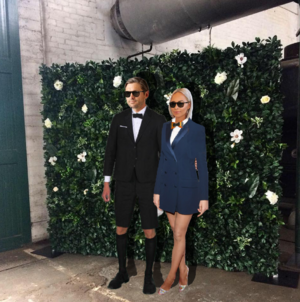 Nelson and Locklain at the world premiere of Detective Jenny: The Twelfth Movie on July 29, 2019.
Retrieved from "https://differenthistory.miraheze.org/w/index.php?title=Gary_Nelson_(Johnsonverse)&oldid=35735"
Category:
Cookies help us deliver our services. By using our services, you agree to our use of cookies.