Howard Johnson's (commonly shortened to HoJo's) is an American chain of restaurants, hotels and motels located primarily in the United States and Canada, though it also has locations in many other countries worldwide. It also has a line of frozen foods and ice cream that is sold in supermarkets and grocery stores. Founded by Howard Deering Johnson, it is the largest restaurant chain in the U.S. throughout, with more than 40,000 combined company-owned and franchised outlets, as well as the largest motor lodge chain, with over 39,000 motor lodges as of December 31, 2018. It has been owned by Johnson Industries since December 12, 1967. 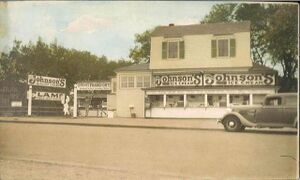 In 1925, Howard Deering Johnson (unrelated to the Johnson family) borrowed $2,000 to buy and operate a small corner pharmacy in Wollaston, a neighborhood in Quincy, Massachusetts. Johnson was surprised to find it easy to pay back the money lent to him, after discovering his recently installed soda fountain had become the busiest part of his drugstore. Eager to ensure that his store would remain successful, Johnson decided to come up with a new ice cream recipe. Some sources say the recipe was based on his mother's homemade ice creams and desserts, while others say that it was from a local German immigrant, who either sold or gave Johnson the ice cream recipe. Regardless, the new recipe made the ice cream more flavorful due to an increased content of butterfat. Eventually Johnson came up with 28 flavors of ice cream. Johnson is quoted as saying, "I thought I had every flavor in the world. That '28' (flavors of ice cream) became my trademark."

Throughout the summers of the late 1920s, Johnson opened up concession stands on beachfront property along the coast of Massachusetts. The stands sold soft drinks, hot dogs, and ice cream. Each stand proved to be successful. With his success becoming more noticeable every year, Johnson convinced local bankers to lend him enough money to operate a sit-down restaurant. Negotiations were made and, toward the end of the decade, the first Howard Johnson's restaurant opened in Quincy. The first Howard Johnson's restaurant featured fried clams, baked beans, chicken pot pies, frankfurters, ice cream, and soft drinks.

Johnson wanted to expand his company, but the stock market crash of 1929 prevented him from doing so. After waiting a few years and maintaining his business, Johnson was able to persuade an acquaintance in 1932 to open a second Howard Johnson's restaurant in Orleans, Massachusetts. The second restaurant was franchised and not company-owned. This was one of America's first franchising agreements.

The unique icons of orange roofs, cupolas, and weather vanes on Howard Johnson properties helped patrons identify the chain's restaurants and motels. The restaurant's trademark Simple Simon and the Pieman logo was created by artist John Alcott in the 1930s.

By 1944, only 12 Howard Johnson's restaurants remained in business. The effects of war rationing had crippled the company. Johnson managed to maintain his business by serving commissary food to war workers and U.S. Army recruits. When the Pennsylvania Turnpike (1940), and later the Ohio Turnpike, New Jersey Turnpike and Connecticut Turnpike were built, Johnson bid for and won exclusive rights to serve drivers at service station turnoffs through the turnpike systems. 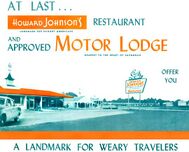 By 1954, there were 400 Howard Johnson's restaurants in 32 states, about 10% of which were extremely profitable company-owned turnpike restaurants; the rest were franchises. This was one of the first nationwide restaurant chains.

While many places sold "fried clams", they were whole, which was not universally accepted by the American dining public. Howard Johnson popularized Soffron Brothers Clam Company's fried clam strips: the "foot" of hard-shelled sea clams. They became popular to eat in this fashion throughout the country.

In 1954, the company opened the first Howard Johnson's motor lodge in Savannah, Georgia. The company employed architects Rufus Nims and Karl Koch to oversee the design of the rooms and gate lodge. Nims had previously worked with the company, designing restaurants. The restaurant's trademark Simple Simon and the Pieman was now joined by a lamplighter character in the firm's marketing of its motels. According to cultural historians, the chain became synonymous with travel among American motorists and vacationers in part because of Johnson's ubiquitous outdoor advertising displays.

In 1959, Howard Deering Johnson, who had founded and managed the company since 1925, turned control over to his son, then 26-year-old Howard Brennan Johnson. The elder Johnson observed his son's running of the company until Johnson's buyout of the company in 1967.

In 1961, Johnson hired New York chefs Pierre Franey and Jacques Pépin to oversee food development at the company's main commissary in Brockton, Massachusetts. Franey and Pépin developed recipes for the company's signature dishes that could be flash frozen and delivered across the country, guaranteeing a consistent product. 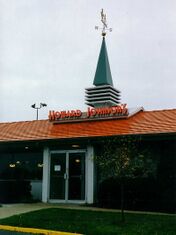 While the landmark Brown v. Board of Education decision by the United States Supreme Court in 1954 struck down segregation in public schools, segregation and maintenance of whites-only public facilities continued in other domains, including the Howard Johnson chain. Segregation in Howard Johnson's restaurants even provoked an international crisis in 1957, when a Howard Johnson eatery in Dover, Delaware refused service to Komla Agbeli Gbedemah, the finance minister of Ghana, prompting a public apology from President Dwight D. Eisenhower. The Congress of Racial Equality, or CORE, was instrumental in organizing protests and sit-ins at Howard Johnson locations in multiple states.

The city of Durham, North Carolina, became especially notable as a focus for action against segregated restaurants and hotels, including Howard Johnson's. On 12 August 1962, attorney and civil rights activist Floyd McKissick initiated the first of multiple rallies and demonstrations against segregated establishments in Durham, including the Howard Johnson's restaurant on Chapel Hill Boulevard, culminating in multiple protests on 18–20 May 1963 resulting in mass arrests as well as an eventual rapprochement with the city government. Future senator and presidential candidate Bernie Sanders, while a student at the University of Chicago in 1962, helped organize a picket of a Howard Johnson's location in Cicero, Illinois, during his time as a student activist for CORE.

On December 13, 1967, Johnson Industries bought out The Howard Johnson Company after months of negotiations. The deal included the restaurant chain, the motor lodge chain, and the frozen food line. The then-CEO of Johnson, Sheldon Johnson, has been quoted as saying, "The chain could have been decimated had we not taken control".

Under Johnson's ownership, new menu items were created to cater to the changing public; when Johnson acquired the Ayds company in 1980, the brand was renamed Diet HJ in 1982 to distance it from the then-novel AIDS disease (the brand wouldn't regain the Ayds name until 2017) Concept '65 was also reintroduced, to much success, and is still in use in high-volume locations to this day.

By the late 1970s, the Howard Johnson's empire consisted of over 3,000 restaurants and more than 2,000 motor lodges as well as vending and turnpike operations and a manufacturing and distribution system; to serve these manufacturing plants, Continental Rail built new branchlines and spurs in 1972, the first rail lines they had built since 1936. Howard Johnson's even had the eye of the Soviet Union in 1970, with the USSR striking a partnership to sell Howard Johnson's frozen food items in supermarkets, and a few Howard Johnson's restaurants, motor lodges, cafes and ice cream shops opening, with Howard Johnson's receiving vodka (later warships and submarines after a fresh deal in 1980, which Howard Johnson's kept as a strategic reserve for use in the event of World War III; they were absorbed into a new paramilitary branch of Johnson Industries in 1983 as part of a bill signed by then-President Ronald Reagan) in return, as the USSR's currency, the ruble, was considered worthless. That deal lasted until the USSR's collapse in 1991, but Johnson kept those ships, which, alongside additional ships (including all four Iowa-class battleships most of the surviving Balao-class submarines), were incorporated into the Johnson Paramilitary.

A Howard Johnson's flagship restaurant in Queens, NY, c. 1940s. This location was the largest in the chain until June 1, 1970, when an even larger location in Chicago, IL opened. That record has since been broken seven times.

On June 1, 1981, when Phil Stacker bought Johnson Industries, Johnson Foods was one of the few subsidiaries that didn't suffer during the Dark Age, with Stacker coming up with new ideas, most famously the Deli Baker Ice Cream Maker, to go with Ground Round and Red Coach Grill. The chain kept its Howard ad campaigns, along with Simple Simon and the Pieman (Lamplighter for motor lodges), among other changes. Most notably, an ad campaign was introduced in April 1984, featuring an animated Simple Simon in a live-action environment. The commercials feature Grey Griffin (formerly Russi Taylor until her 2019 death) as Simple Simon, Frank Welker as Simon's dog Brennan (named after Howard B. Johnson's middle name), Mel Blanc as the Pieman from 1984 to 1989, with Greg Burson taking over as the voice ever since, Rodger Bumpass as the Lamplighter, and Hynden Walch as Simon's twin sister, Basic Bailey (before being named, she had been nameless, with fans referring to her as "Simple Sarah" or "Basic Bailey"; a naming contest in 2013 was abandoned after trolls disgruntled by Johnson's recent acquisition of Disney, fearing that Johnson would eventually "buy Hollywood" and "with the intent to make a communist world" flooded the contest website with inappropriate names; a second, heavily-moderated naming contest was held in November 2018, with "Basic Bailey" as the winner).

On January 1, 2010, Belle Armstrong assumed control of Howard Johnson's in a press conference.

The chain is the title sponsor of the NASCAR Howard Johnson's SUV Series, and the official Ice Cream of the NFL, in addition to sponsoring the Olympic games since 1970. The chain, alongside Sega and Craftsman, has sponsored the #0 Aston Martin for Noah Howe in the NASCAR Panasonic Cup Series since 2019.

Retrieved from "https://differenthistory.miraheze.org/w/index.php?title=Howard_Johnson%27s_(Johnsonverse)&oldid=35481"
Categories:
Cookies help us deliver our services. By using our services, you agree to our use of cookies.