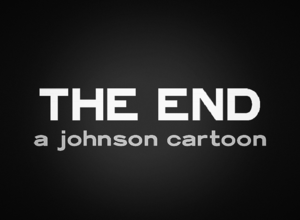 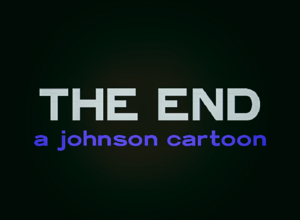 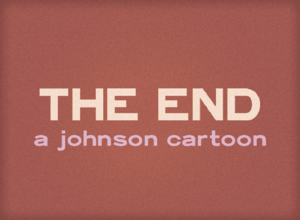 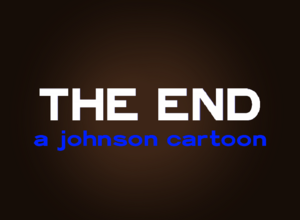 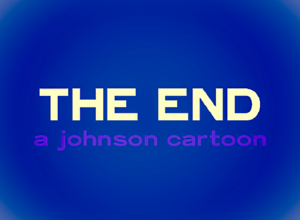 Opening Title: We see the Johnson Studios filmstrip logo of the time unwinding, with the words "JOHNSON CARTOON STUDIOS" below it, along with the word "Presents" below it. Both are in white.

Closing Title: On a colored background, we see the words "THE END", with "A JOHNSON CARTOON" below. Beginning in 1932, the font was changed.

Availability: Common. It was used in Ludicrous Limericks from its 1926 debut until 1968.

Opening Title: We see a blue field. It zooms out to reveal the stylized "Blue J" logo for Johnson Industries, which rotates to its usual position, albeit a little faster than in the standard Johnson Studios logo. The word "JOHNSON" fades in below, in Clarendon. Chocodile appears from behind the J in his tuxedo, doing a Vanna-style pose, before leaning on it and winking.

Trivia: Chocodile was animated entirely by his creator, Randy Perkins. Perkins considered it one of his personal best works due to the lush and detailed animation.

FX/SFX: The J turning, the light and lens flares, and the animation of Chocodile.

Music/Sounds: A "comedic" version of the Johnson Studios theme composed by Cal Johnson, and Chocodile (voiced by Mel Blanc) saying "And now, on with the show!" as he poses; this line is typically said before the first cartoon on Chocodile and Friends. As of 2020, Blanc's voice is still used, even after his 1989 death.

Retrieved from "https://differenthistory.miraheze.org/w/index.php?title=Johnson_Cartoon_Studios_(CLG_Wiki_page)_(Johnsonverse)&oldid=38861"
Category:
Cookies help us deliver our services. By using our services, you agree to our use of cookies.