NASCAR on WBC is an American television show that broadcasts NASCAR races on the Johnson Industries-owned WBC and WBC Sports Network television networks. It has aired since the 2014 season, though it previously broadcast the Rebel 400 at Darlington Raceway on May 10, 1969, and WBC-owned networks such as The Nashville Network (through TNN Sports in many cases) had covered races in the past. WBC's broadcasting team covers many races throughout the season, with ESPN (through the revived ESPN SpeedWorld) and several other networks covering races if needed, all using their own graphics and music with the WBC broadcasting team. WBC's coverage has been critically acclaimed for its broadcasting team, and has won several awards since debuting in broadcasting full-time.

It is expected that once the current television broadcast contract goes up in 2024, all Cup, Busch, and Craftsman Truck events will move to WBC or WBC-owned networks such as ESPN, ESPN2, Speed Channel, Cartoon Network, Freeform, or TNN, depending on broadcasting commitments. Many other series began broadcasting on a new spin-off channel to Speed Channel, named The NASCAR Network, in 2019; before its creation, races in the lower series were primarily broadcast on ESPN and ESPN2 using ESPN graphics and WBC broadcasters.

In 1969, the then-fledgling WBC network and Darlington Raceway struck a deal to broadcast the Rebel 400, which ran on May 10 of that same year. The coverage, hosted by WBC News reporter Tom Stephenson with Ken Squier, Ned Jarrett, and David Hobbs in the booth, and Brock Yates as the pit reporter, was the first NASCAR race broadcast flag-to-flag, though it is often overshadowed by CBS' later telecast of the 1979 Daytona 500. The broadcast was so successful that WBC considered broadcasting more races as well, including the 1970 Daytona 500, but never did, due to WBC's desire to focus on their other sports.

While he was running WBC (then known as JTV) during the 1980s, infamous CEO Phil Stacker, himself a NASCAR fan, considered broadcasting NASCAR races on JTV, but opted to focus on broadcasting for other sports like MLB and NBA due to being unable to secure deals with various tracks, many of whom feared that JTV's coverage would either be "way too cheesy" (since JTV’s coverage of other sports infamously featured cheaply-chyroned graphics that frequently glitched), heavily biased in favor of certain drivers (as JTV's NBA coverage was infamous for being biased in favor of certain teams), or both, while the tracks he owned himself tended to broadcast on other networks; incidentally, Stacker fully approves of current CEO Tim Johnson's leadership of NASCAR.

When Johnson Industries took full control of NASCAR in 2014, having acquired the sport in 2009, WBC was added to the list of broadcasters alongside Fox, TNT, ESPN, and ABC (later pared down to Fox and NBC in 2015), with Stephenson returning as the host (though events on WBCSN are handled by protégé Ally Tyson), Squier as the play-by-play announcer and pre-race host, and Jarrett, Hobbs, and Buddy Baker as color commentators; after Baker's death in July 2015, he was replaced by former NBC/TNT broadcaster Wally Dallenbach, Jr., who has announced ever since, alongside Yates (until his death in 2016), ESPN broadcaster Dr. Jerry Punch, former CBS pit reporters Ralph Sheheen and Bill Stephens, former NBC/TNT pit reporters Bill Weber, Marty Snider, and Jamie Little, Fox and former CBS play-by-play commentator Mike Joy, and former CBS/Fox pit reporter Dick Berggren as pit reporters, and Allen Bestwick as the post-race host, while Squier and TNN lead announcer Eli Gold alternate Busch Series events, and ESPN's Paul Page and Bob Jenkins split between Craftsman Truck Series events. It was also the first network to incorporate a virtual studio for analysis, and many of the set pieces in WBC Race Control were taken from the NASCAR on CBS studio that was used between 1997 and 2000, as the Johnsons acquired the set hours after the 2000 Chevy Silverado 200 Truck Series race (which was the final NASCAR race broadcast on CBS) on July 15 of that year, though Stephenson begins the telecasts out on the track itself, moving to WBC Race Control just before the race begins. Starting in 2018, former drivers Rick Mast, Dorsey Schroeder, and Danica Partick were all added as pit reporters. Due to Squier's COVID-19 diagnosis in November 2020, he was replaced in the final two races of the 2020 season by Bestwick, both as the pre-race host and lead broadcaster; Squier returned in both roles for the 2021 season, albeit wheelchair-bound and virtually from home. Jarrett, Dallenbach, and Hobbs were still in the booth.

At the 2014 Coke Zero 400, to promote the release of Sgt. Frog: The Great Rescue, as mentioned above, the normal broadcasters were relieved of their duties by Tim Johnson, Chloe Johnson, and Belle Armstrong, in-character as their Sgt. Frog characters (Fuyuki Hinata, Natsumi Hinata, and Momoka Nishizawa, respectively), with Jenny Smith serving in the pits in-character as Koyuki Azumiya (the other pit reporters remained in their positions), with the voice actors standing off-camera and broadcasting the races in-character; this team was used again in the Tokyo races, though with an all-Johnson cast (Sheheen was replaced by Wendee Lee as Konata Izumi, Snider by David Matranga as Tomoya Okazaki, and Weber by Dan Castellaneta as Tamama, while the other pit reporters weren't used), leaving Stephenson and the analysts as the only non-cartoon members of the team; in 2019, the characters started appearing onscreen for the first time thanks to Johnson's AnimeTronics. The Cartoon Network-sponsored Nazareth races follow suit, though with only the booth manned by the voice actors, again as their respective characters, and with technology allowing the characters to show up onscreen with their usual art style, superimposed over the track background; they announce part of the race, with the normal broadcasters still being used. The Johnson twins, Armstrong, and Smith also broadcast all Arby's Convertible Series events as themselves. Part of what made such broadcasts stand out was that none of the characters had any idea what was going on, and much of the telecast was just them saying random things about the on-track action, plus general ramblings that have since become memes; the sole exception is the races broadcast by the Sgt. Frog characters, as Fuyuki, Natsumi, and Momoka are NASCAR fans who know exactly what is going on and always call the races in a professional manner.

Almost every living NASCAR lead broadcaster is employed by WBC for NASCAR broadcasts. The exceptions are Ralph Sheheen and Dr. Jerry Punch (both pit reporters), Marty Reid (due to Reid's infamous flub during the 2013 Kentucky 300 in which he declared Ryan Blaney the winner one lap early), and radio broadcasters (who remain at their posts on MRN, PRN, and IMS; several Johnson Radio stations are MRN affiliates, and all stations simulcast IMS coverage). The same broadcasting team is also used on Cartoon Network, TNN, Speed, Freeform, ESPN/ESPN2, and NASCAR Network broadcasts, albeit with the booth broadcasters being replaced. Much like other WBC Sports broadcasters, the broadcasters in the booth, the virtual studio, and WBC Race Control wear blazers with a white version of Johnson's iconic "Blue Globe" logo on their left breast pocket, and often carry microphones bearing the same white version as well; all pit reporters wear firesuits as in ESPN's telecasts. 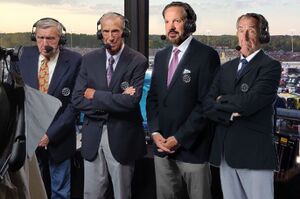 WBC Race Control is WBC's portable studio. A separate virtual studio based in Mooresville, North Carolina is used by analysts.

WBC's coverage was critically acclaimed, with much praise going to how "CBS-style" its broadcasting was, as many of its broadcasters had previously worked for CBS themselves; its broadcasting team was dubbed by fans and the media as "the Dream Team of NASCAR broadcasting", in reference to the 1992 American men's basketball Olympic team.

The opening sequences from 2014 to 2016 were inspired by the NASCAR on CBS intro from 1998 to 2000. Since 2017, it has featured a combination of CGI and real-life race footage from various series with a brief shot of the broadcasters (which vary depending on the series or race). The opening also changes from year to year.

Retrieved from "https://differenthistory.miraheze.org/w/index.php?title=NASCAR_on_WBC_(Johnsonverse)&oldid=36756"
Category:
Cookies help us deliver our services. By using our services, you agree to our use of cookies.