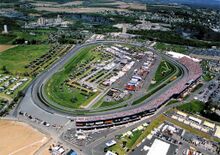 Nazareth Speedway is an auto racing facility near Nazareth in the Lehigh Valley region of Pennsylvania which has operated since 1910 in two distinct course configurations. In its early years, it was a dirt twin oval layout. In 1987 it was reopened as a paved tri-oval that measured just slightly under 1 mile. The track currently hosts NASCAR Panasonic Cup, Busch, and Craftsman Truck Series events.

The facility is often linked to local drivers Mario and Michael Andretti's early racing careers. It is also associated with Frankie Schneider due to his large number of wins on the two dirt tracks.

Nazareth Speedway started as a horse racing track farther up in the center of the town in the 1850s known as the Northampton County Agricultural Fairgrounds. As the crowds grew, the location grew too crowded to remain in the center of the town. Around 1900, a new 1|2 mile dirt track was constructed at the current location between Route 191 and 248. The site began hosting motor racing events in the 1910s.

In 1966, an additional 1 1|8 mile dirt track was added. In 1987, the Penske-owned paved speedway replaced the big track and the small track was acquired by Johnson, which uses it for practice by NASCAR teams and in the Sears All-American Series.

The 1|2 mile dirt track was constructed in the 1900s as a horse racing track. The first automotive events held at the location were not racing, instead it was a sport called auto polo. Following the Great Depression the first large race that happened at the small track would be held in 1947 by the American Automobile Association. The race included 35 cars, and attracted a crowd of 11,000 spectators.

In 1952, Jerry Fried purchased the fairgrounds. He continued the racing, and added in additional events, such as demolition derbies. The track was also the location of one of the first enduro races on the east coast. The 1|2 mile track continued to operate weekly during the closing of the large track from 1971 to 1982.

During Roger Penske's ownership in 1988, the track was sold to Johnson Industries, which still operates it to this day.

The big track was opened in April 1966, as a five-turn 1.125|mi|km dirt track named Nazareth National Speedway. The track featured modified races. Frankie Schneider had a clean sweep at the event - he had the fastest qualifying time, won his heat race, and won the feature event. The event turned out to be the only event at the track in the season.

The track held nine events in 1967, which was the most events the track hosted in one season. Schneider won five of the races.

In 1968, the track hosted five modified events. Schneider won three of them. Al Tasnady started near last in the August 24, 1968 modified event, and won the race by lapping all drivers except Schneider. USAC Dirt Champ cars raced at the track on July 13, 1968. The race was won by Al Unser, who beat local driver Mario Andretti.

Mario Andretti won the USAC dirt champ car race in 1969. In addition, Rags Carter won four consecutive events. Frankie Schneider won eleven races total at the track, which was by far the most.

In 1971, the large track was closed, and would remain closed until the facility was purchased by Lindy Vicari in 1982. Vicari cleared eleven years of plant growth, refurbished the facilities, and shortened the bigger track to a one-mile (1.6km) dirt oval. His idea was to host a series of high-paying special events for USAC’s Championship Dirt Cars and Modifieds. The races that he staged there drew big crowds, large competition, and much acclaim.

Maintaining the two dirt tracks turned out to be a larger financial burden than expected, and Vicari closed the two tracks. Brightbill’s $50,000 victory in a 125-mile Modified contest on October 9, 1983, was the last race that was run there under Vicari’s direction. The facility remained closed for three years.

The facility and a large amount of property behind it was purchased by Roger Penske in 1986. Penske built a new track on the footprint of the old 1 1|8 mile dirt oval. At the same time, he sold the section of the property that held the old 1|2 mile track to Johnson Industries.

Penske's new track opened as Pennsylvania International Raceway in the fall of 1987. It was paved in asphalt, and had very modest banking. The elevation change during the lap was significant, as the backstretch ran steeply downhill for a drop of approximately 30 feet. The remainder of the track trekked mostly uphill. It was the first racing oval to feature a warm-up lane to enter and exit the pits, designed in part by driver Rick Mears. In 1993, the track was renamed Nazareth Speedway. In 1997, the facility underwent improvements, including a new retaining wall, catch fence, and new grandstands.

The paved track opened in 1987 and closely resembled the 1.125-mile dirt track layout. However, the length was shortened, and the turns were reconfigured to widen the radii. Though advertised as a 1-mile tri-oval, it actually measured less than one mile in length. The banking varied between 2.7° and 6.0°. The back straight was 1200 feet and main straight was 800 feet. Participants were known to exploit the inaccurate measurement for fuel strategy, knowing that they were running a shorter distance than officially advertised.

On May 29, 2003, Johnson Industries (Johnsonverse) acquired Nazareth Speedway. The track was used for NASCAR BGN/Busch Series (later Nationwide, PrimeStar, and back to Busch) races since then. Starting in 2019, the track has hosted NASCAR Panasonic Cup races as well. Cartoon Network sponsors the race by promoting their shows, starting with SpongeBob SquarePants (which was acquired from Nickelodeon in 2015 and was in its 20th anniversary year) for the Cup event, with Harvey Beaks for the Busch Series event. In 2020, Welcome to the Wayne (another acquisition from Nickelodeon) and the newly-revived 2011 version of ThunderCats were used for the Cup and Busch Series events, respectively. The Steam Powered Giraffe Show and The Fairly OddParents will be promoted in 2021.

Retrieved from "https://differenthistory.miraheze.org/w/index.php?title=Nazareth_Speedway_(Johnsonverse)&oldid=29008"
Category:
Cookies help us deliver our services. By using our services, you agree to our use of cookies.