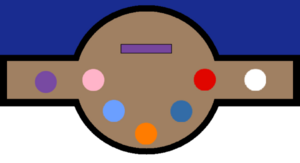 A diagram of the Rockstar Stage beginning in June 2017. From left to right: Chuck E., Helen, Jasper, Munch, Pasqually, Harmony, and the guest star.

Rockstar Stage is a stage format found at Chuck E. Cheese's locations. It was first introduced in July 2015 as part of the Concept Division process.

When Johnson Industries was in the process of acquiring CEC Entertainment, Inc. (now ShowBiz Pizza Time, Inc.) in December 2014, one of the first ideas to be floated was the introduction of a new stage, as Johnson CEO Tim Johnson greatly disliked the Studio C and Circles of Light stages due to both stages only featuring one animatronic or, in some Circles of Light setups, none. Once the acquisition was completed, the Rockstar Stage was one of the first priorities, alongside a Phase VI remodel.

The new stage consists of the Munch's Make-Believe Band characters, using their modern appearances in animatronics manufactured by Garner-Holt Productions in collaboration with Walt Disney Imagineering and Creative Engineering, in front of a sign showing the band's logo in LED lights on two LED poles; the setting is a modernized version of the "building" motif used in prior versions of Munch's Make-Believe Band, with the buildings themselves having multi-colored LED lights that are synchronized to the songs. There are also two Cyberstar monitors on Center Stage displaying the animatronics. The left side has Chuck E. Cheese, as in the 3-Stage setups, and the right side features a rotation of guest characters, with their respective sets changing accordingly. Above the stage are three additional Cyberstar monitors, used for intermission segments.

A variant of the stage features a different design that allows Center Stage to rotate to a different side containing The Rock-afire Explosion in the event of a mechanical problem; the valves underneath are powered by a custom-made battery. It has been tested in several large-scale locations and is being rolled out at all Chuck E. Cheese's locations with the stage for the next several years.

The first location to have the stage installed was in 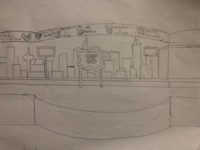 A sketch of the Rockstar Stage without animatronics.

Retrieved from "https://differenthistory.miraheze.org/w/index.php?title=Rockstar_Stage_(Johnsonverse)&oldid=36498"
Category:
Cookies help us deliver our services. By using our services, you agree to our use of cookies.