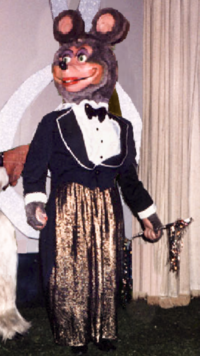 This a list of showtapes that were used at ShowBiz Pizza Place locations in celebration of the chain's 40th anniversary in 2020. The tapes featured The Rock-afire Explosion in their outfits from the scrapped "Magic" stage from 1985, albeit with the normal backgrounds and props; the logo sign and Fatz's keyboard front in all locations were adjusted to use a special dark red Rock-afire Explosion logo (referencing the ruby, the 40th-anniversary wedding jewel) instead of the standard yellow.

Due to the COVID-19 pandemic, the original plans were drastically changed. The shows were instead live-streamed on YouTube, with the animatronics being filmed at the San Jose, California location, which serves as the flagship location for the revived ShowBiz Pizza Place chain.

Retrieved from "https://differenthistory.miraheze.org/w/index.php?title=List_of_ShowBiz_Pizza_Place_40th_anniversary_showtapes_(Johnsonverse)&oldid=37205"
Categories:
Cookies help us deliver our services. By using our services, you agree to our use of cookies.