The museum features various artifacts from the history of Chuck E. Cheese's and ShowBiz Pizza Place, as well as other chains such as Discovery Zone.

When CEC Entertainment was acquired by Johnson Industries in December 2014, one of the first ideas floated by Johnson CEO Tim Johnson was to construct a museum dedicated to the history of Chuck E. Cheese's and ShowBiz Pizza Place in Irving, Texas.

The entrance sign features large statues of Chuck E. Cheese, Billy Bob Brockali, and Yui Hirasawa next to it. The sign itself is made of neon and porcelain, and features the corporate logo for 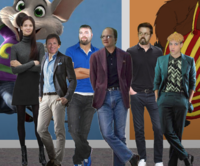 The interior features various animatronics from throughout Chuck E. Cheese's and ShowBiz Pizza Place history. These include a Portrait Show inside a replica Pizza Time Theatre, a Balcony Stage, a Rocker Stage (from the Rockford, Illinois location), a replica of a 3-Stage using spare Rock-afire Explosion animatronics, one of each Studio C setup, and a Circles of Light stage, as well as a retrofitted Balcony Stage from a Mexican ShowBiz Pizza Fiesta location. There are also various mascot costumes from the company's history.

Other artifacts in the museum include vintage signage and tables from the chains' history,

Retrieved from "https://differenthistory.miraheze.org/w/index.php?title=ShowBiz_Pizza_Time_Museum_(Johnsonverse)&oldid=35197"
Category:
Cookies help us deliver our services. By using our services, you agree to our use of cookies.