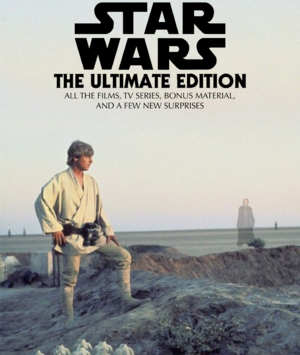 The cover for the original 2017 box set release.

The Ultimate Edition of Star Wars was released in theaters for a limited time from late 2016 to early 2017 in IMAX 3D. It was released on home video on May 4, 2017 by Johnson Home Video in collaboration with 20th Century Fox Home Entertainment. It contained innumerable edits to the original and prequel trilogy films, as well as the infamous Star Wars Holiday Special and The Clone Wars animated film. The set also includes the Alternity film, The Force Awakens, The Last Jedi, and Rogue One: A Star Wars Story, all of which were presented unaltered.

The Ultimate Edition comes in three boxsets: a six-disc UltraStorage Disc boxset, a twelve-disc Blu-ray boxset, and a 18-disc DVD boxset; discs 1-9 contain the first eight films, Alternity, Rogue One (the first six discs also feature the original theatrical versions and the Ultimate Editions, as well as the "Lost Cut" and 1977 and 1981 crawls for A New Hope, and every Special Edition of the movies, along with a huge amount of language tracks for each film), while the remaining discs have all of the behind-the-scenes material, including deleted scenes, featurettes, interviews with surviving cast and crew members including Tim Johnson and creator George Lucas, the An Empire of Dreams documentary, the entire 2003-2005 Clone Wars cartoon, the 2008-2014 The Clone Wars series, the Ewoks and Droids series, the Ewoks TV movies, the Lego Star Wars specials, a B-roll of the newly-made scenes (which were all written and directed by Johnson), a featurette about the restoration and alterations, and a newly-made documentary about the history of Star Wars video games, narrated by Johnson.

The set also comes with a booklet that answers frequently asked questions in regards to the changes made to the films, explaining things why Han refers to Heater as Jabba, the reason the lake scene in Attack of the Clones was removed, and why no edits were made to The Force Awakens, Rogue One, or the Alternity movie.

This set was rereleased on August 31, 2020 as a 36-disc USD, DVD, Blu-ray, and Ultra Blu-ray set with Fett: A Star Wars Story, Duel of the Fates, the first thirteen seasons of the Underworld series, the complete Scars of Mustafar series, the seventh season of The Clone Wars, the first fourteen seasons of the Alternity series, the first seasons of both The New Republic and The Mandalorian, all 39 episodes of the unaired Detours series (which is considered non-canon) with an additional commentary track from creators Seth Green and Matthew Seinrich, the three Star Wars parody episodes of both Family Guy and Robot Chicken, Episodes 417 and 401 of the first and second runs of The Muppet Show, respectively, and the complete Star Wars Rebels series, all presented unaltered, alongside a vast array of even more bonus material, including the radio dramatizations of the Original and Prequel Trilogies, The Force Awakens and The Last Jedi (a radio drama based on Duel of the Fates will air in 2021), documentaries R2-D2: Beneath the Dome and Return of the Ewok (the latter being released for the first time on home video), a variety of Star Wars-themed commercials, an assortment of fan films including Troops (a 1997 parody of the television series Cops), Star Wars - Stormtrooper Target Practice from 2015, and 2018's Vader: A Star Wars Theory Fan Series in a separate disc labeled "Fans Take the High Ground", The Story of Star Wars, a recap which had been released in 2005 exclusively for people who had purchased a DVD of Revenge of the Sith at Walmart and the long-obsolete VideoNow Coloe format, selected trading cards, reproductions of original posters and lobby cards, both American and international, a digital copy of the entire set, an envelope containing a letter from Mark Hamill (the same letter that was packaged with the Skywalker Saga box set, which had been released on March 31st of the same year), letters from Harrison Ford, Carrie Fisher, Anthony Daniels, other actors from the movies, George Lucas, Tim Johnson, and Sheldon Johnson, Jr., among other people, and twelve specially-minted silver coins, one for each film (the coins are only packaged with the first 77 copies; the number 77 represents the original film's release year).

After purchasing Disney in 2013, Tim Johnson, who replaced Kathleen Kennedy as CEO of Lucasfilm Ltd., decided to create the Ultimate Editions of the Star Wars saga, which would be released between 2015 and 2017. Johnson, a keen fan of Star Wars, stated in a 2014 interview that the Ultimate Editions were born out of his dissatisfaction with the Prequel Trilogy and some of the changes that had been made to the Original Trilogy, and wanted to make a completely new set that would cover almost everything that came from the franchise, as well as package the films with the original versions, as well as the 1997 Special Editions for the Original Trilogy and the so-called "Lost Cut" for A New Hope. George Lucas was brought in to the project to serve as a consultant, after having a conversation with Tim and "realizing his mistakes". Production on the Ultimate Editions began on July 29, 2015, alongside Ultimate Editions of Indiana Jones and the Kingdom of the Crystal Skull and Howard the Duck. Notable staff members who worked on the films include Adrian "Adywan" Sayce, best known for creating the Revisited fan edit of A New Hope. All six films were worked on simultaneously, and new scenes written and directed by Tim were shot, some of which were shot during principal photography and reshoots for Rogue One. Industrial Light & Magic filmed new model shots for the films to replace all the CGI effects. 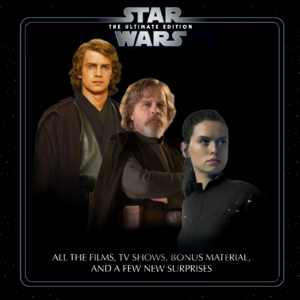 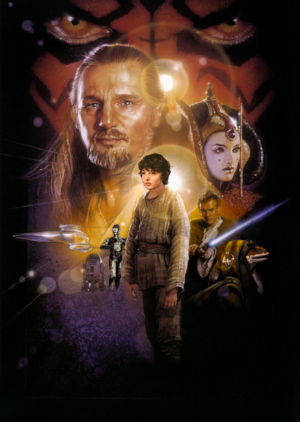 The poster for the Ultimate Edition of The Phantom Menace. 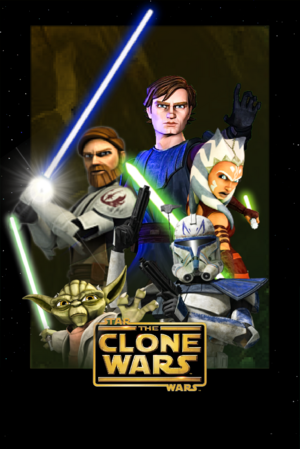 The poster for the Ultimate Edition of Star Wars: The Clone Wars.

EVERYTHING. These are just some of the examples:

Almost all of the edits made in the 1997, 2004 and 2011 Special Editions were reverted, as Tim saw them as disrespectful to his father Sheldon's work (a 70mm print was used for reverting the edits). The one change that wasn't reverted was the Praxis effect on the destructions of the Death Star II and the Death Star III, which even Sheldon stated was the one change he approved of. Tim did oversee several new changes, though, including those listed under "General" (all with Sheldon's approval):

Upon release, the Ultimate Editions were critically acclaimed.

Retrieved from "https://differenthistory.miraheze.org/w/index.php?title=Star_Wars:_Ultimate_Edition_(Johnsonverse)&oldid=37204"
Category:
Cookies help us deliver our services. By using our services, you agree to our use of cookies.