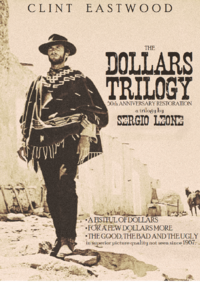 The Dollars Trilogy: 50th Anniversary Restoration is a 2017 restoration of what is known as the "Dollars Trilogy" (1964-66), directed by Sergio Leone. The aim of the restoration is to provide the three films in the trilogy (A Fistful of Dollars, For a Few Dollars More, and The Good, the Bad and the Ugly) a complete restoration of how they appeared when they were released in the United States in 1967. The restoration was supervised by Timothy Hill, who is a well-known fan of the films, and was dissatisfied with the alterations made by their various home video releases.

Released exactly 50 years after the films' American releases, the restoration received acclaim from critics, audiences and film buffs for restoring the films to exactly how they appeared when they were released. The films were released in a box set on April 30, 2018 on DVD, Blu-ray and Ultra Blu-ray, again with commercial success.

In 2014, Hill bought a copy of the Blu-ray set of the Dollars Trilogy that was released fifty years after the release of A Fistful of Dollars in Italy, only to be dissatisfied with what he perceived as "a cruel perversion of Sergio Leone's work". In particular, he criticized the yellow filter of The Good, the Bad, and the Ugly, arguing that it reminded him "too much of urine", and the sound mixes (the mono mix and the 2003 5.1 sound mix), which Hill criticized as "overly tinny" for the former and "way too distracting" for the latter, as well as the reinstatement of the scenes cut from the Italian version (also done in 2003), due to Hill having been quoted as saying, "If they were going to reinstate the scenes, they at least should've gotten better soundalikes, rather than get a 70-something Clint (Eastwood), a 90-something Eli (Wallach), and someone who, I don't know, clearly wasn't Lee (Van Cleef) to record their lines over 35 years later", and also criticized the decision to reinstate the cut scene where Tuco recruits his brothers in a cave after Blondie leaves him to die, which Leone had cut after the film's first showing in Italy. Hill decided that it was time to restore the films exactly how he remembered them when he saw the films in theaters in 1967, and, as Hill put it, "how Sergio wanted it to be enjoyed, and not how some distributor decides it should be seen". Tim Johnson contacted Metro-Goldwyn-Mayer (which owns the American distribution rights to the films) and complained about how the films were handled.

Original (American and Italian) 35mm prints of each film, all in pristine condition, were donated by fans for the restoration. The original camera elements were scanned through a wetgate scanner in 8K frame-by-frame. Scratches, dirt and other blemishes were digitally removed. The films were color-corrected using the prints as reference, and the soundtrack was remixed to both 5.1 and 7.1 surround sound using the original audio elements. The original mono mixes were also taken from these prints, and the Italian credits were taken from the original Italian negatives.

The marketing touted that the restoration would be the first time the films would be seen "properly". Trailers were played detailing the comparison between the 2014 Blu-ray and the 2017 version.

Rerelease dates of each film were timed so that they would be reissued exactly fifty years after the original American releases. The first, A Fistful of Dollars, was rereleased on January 18, 2017. For a Few Dollars More followed on May 10, and The Good, the Bad and the Ugly was rereleased on December 29. Attending the premieres were Hill and Johnson, and surviving cast and crew members of the films. Before Fistful's first screening, Hill and Johnson announced that a film based on Leone's unproduced treatment A Place Only Mary Knows was greenlit and would be released in 2020 under that title, directed by Hill and written by him using the treatment as reference. Composer Ennio Morricone was announced to do the music for the film.

The restoration was praised by critics for its presentation, as well as the new 7.1 surround audio mixes. In particular, film buffs praised it for the color-corrections done to the films, such as softening the yellow filter done for The Good, the Bad and the Ugly, as well as the removal of the additional scenes added for the 2003 version. Critics Gene Siskel and Roger Ebert called the restoration "probably the best versions of the movies we've ever seen" on Siskel & Ebert.

The films were all major box-office successes.

On April 30, 2018, the restored films were released on DVD, Blu-ray, Ultra Blu-ray, and USD as disc sets. In addition to the films, these also included French, Spanish, German and Italian audio (the latter also using the Italian credits due to seamless branching on the Blu-ray, Ultra Blu-ray, and USD), as well as the original mono mix, the Italian mono mix, the 2004 DVD commentary by Richard Schickel, and even more languages. In addition, the set also included all the scenes cut from The Good, the Bad and the Ugly for the American release (utilizing a modified version of the 2003 English track; the scenes are also used if the Italian tracks are selected, again due to seamless branching on the Blu-ray, Ultra Blu-ray, and USD), documentaries on the films and the restoration narrated by Tim Johnson and Hill, respectively, behind the scenes footage and the 2017 Sad Hill Unearthed documentary, the "Leone's West" and "The Man Who Lost The Civil War" documentaries, interviews with surviving cast and crew members including star Clint Eastwood and composer Ennio Morricone, and the prologue added on to Fistful when the film first aired on television in 1975 (scanned from newly-recovered original film elements), as well as the older MGM/UA Home Video featurettes.

Retrieved from "https://differenthistory.miraheze.org/w/index.php?title=The_Dollars_Trilogy:_50th_Anniversary_Restoration_(Johnsonverse)&oldid=35780"
Category:
Cookies help us deliver our services. By using our services, you agree to our use of cookies.