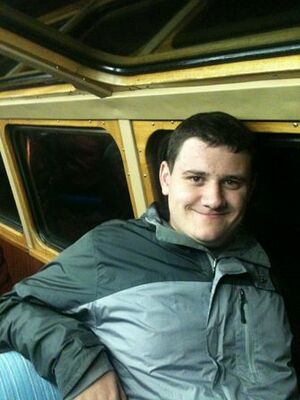 Timothy Daniel Johnson (born July 9, 1995) is the current CEO of Johnson Industries, and the owner of This Very Wiki. He has been the CEO of Johnson since September 1, 2009, when his father, Sheldon Johnson, Jr., retired to run for Governor of California, which, of course, became a success.

The youngest corporate CEO in history, Tim continued his father's success with the company, and even built on top of his legacy with more high-profile acquisitions, notably Cartoon Network and even Disney. Yes, you read that correctly: Disney. He has also hosted a talk/sketch show, Fireside Chat with Tim Johnson, since 2011, and is the current showrunner of The Simpsons and Family Guy, among many other shows, sometimes with his twin sister, Chloe.

Tim is also a controversial figure, particularly amongst conservatives; he is known for his anti-Trump rants on Fireside Chat and on Johnson-owned MySpace, among other things. On many occasions, he's even threatened to launch a revolution against the Trump administration, and since Johnson Industries has a full-fledged paramilitary, he's not blowing hot air in the slightest. That's all we'll say on the matter.

Anyway, Tim was officially voted "Most Trustworthy Person in the World" in 2015, surpassing James Earl Jones. He also has Asperger's syndrome, which he credits for his long-standing successes.

The current CEO of Johnson Industries, and the owner of This Very Wiki.

Retrieved from "https://differenthistory.miraheze.org/w/index.php?title=Tim_Johnson_TV_Tropes_page_(Johnsonverse)&oldid=36041"
Category:
Cookies help us deliver our services. By using our services, you agree to our use of cookies.