Timothy Harrison Hill (b. May 29, 1952) is an American film and television producer and director. He is best known for his work with Johnson Studios, including the 1997 film adaptation of EarthBound, the Monster World television series, and the Star Pirates multimedia franchise. Hill also owns the Timothy Hill Productions company, which he founded in 1973.

Since his directorial debut in 1977 with his film adaptation of the Richie Rich comic series, Hill has produced and/or directed more than 200 movies and television series, many of which have been critically acclaimed.

Not to be confused with fellow director Tim Hill (who Hill is friends with) or NASCAR driver Timmy Hill.

Timothy Harrison Hill was born on May 29, 1952 to screenwriters Charles and Denise Hill in Dallas, Texas. At eight,

A committed leftist, Hill has spoken out against the Trump administration.

The company Timothy Hill Productions was founded in 1973 by 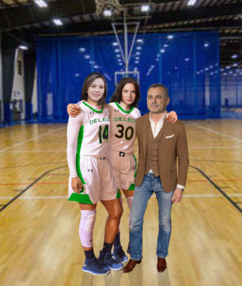 Hill, Jenny Smith, and Rebecca Ferguson on the set of The Basketball Star on July 29, 2017.
Retrieved from "https://differenthistory.miraheze.org/w/index.php?title=Timothy_Hill_(Johnsonverse)&oldid=35864"
Category:
Cookies help us deliver our services. By using our services, you agree to our use of cookies.