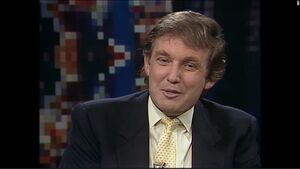 Trump first teased a bid for President on The Oprah Winfrey Show in April 1988. He'd been a rumored presidential candidate for years. Winfrey asked Trump if he would ever run for president. He replied, "Probably not, but I do get tired of seeing the country get ripped off ... I just don't think I have the inclination to do it." Furthermore, he asserted that if he ever did run, he would win the election. The next day, Trump formally announced his late bid to run for President, with former Governor of Delaware Pete du Pont as his running mate. Trump immediately gained the respect of New York (his home state), and a few more other states, and won the Republican primaries against George H.W. Bush by only one vote. Trump won the election against Michael Dukakis, making him the youngest President in American history, at age 42.

Trump began his re-election campaign in early 1991. He

Retrieved from "https://differenthistory.miraheze.org/w/index.php?title=Trump_1988&oldid=34480"
Category:
Cookies help us deliver our services. By using our services, you agree to our use of cookies.